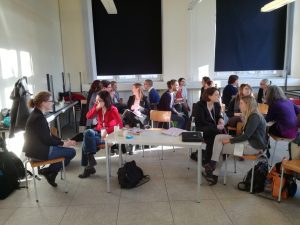 I have been invited as a speaker to “Impro talks symposium” (Zurich, Oktober, 2016) organized by Gunter Lösel (Institute for the performing arts and film at Zurich University of the arts). One workshop was done by the marvelous Dr. Duncan Marwick. He is an expert and practitioner on playback theater, he worked with the participants with different games.

In this blogpost I want to concentrate on the very first game he used. A ball game. I hate ball games. Hate is probably the wrong word: My experience is, that it is very hard for me, to catch balls, I often let them drop, even if I try very hard not to. So for this occasion another word is (mental) overload. I get frustrated very fast and the feeling, that I can’t be a part of this game is getting overwhelming. Often I drift in a set of mind that is dominated by resignation and growing apathy. Of course this results in reducing the chance to catch a ball near or equal zero. I even get the feeling, that I am bad in throwing balls so that other can catch it “properly”. And this feeling often influences my actions.

What is more, I think that I notice that other people in the group get impatient. Even angry about my incompetence – or worse, some even laugh, when I drop a ball just another time. (Which of course is seldom connected to me but it feels like it). And I feel like people stop to throw balls for me.

Why I am describing all this is, that I sometimes hear similar things from people who watch or take part in improvisation activities.

Hold it! Isn’t it just this Christian, who often and often tells how awesome improvisation is, how valuable, how inspiring and energy giving, how it connects and includes people and fosters participation? How it makes people get a better grip in their life, feel and use more self efficacy? How it fosters to cooperate more intense, get loads of fantastic ideas? Yes, and I just used some approaches and tools of applied improv at a conference and some people told me things, very similar or just with the exact words as I used, describing my “ball experiences”.

Someone at this conference even said aloud, it is an issue of not-inclusion: There are people who are (who think and feel, they are) slower. There are people bringing in ideas and words faster, sometimes pushing hard, taking all the room that is there. And some people step back – feel outside the game – they even can’t see any “balls” flying – the noun balls is used here for words, ideas, contributions of any form and given in different ways. They get frustrated and – see my description above…

Back to Duncan Maverick ball game: He used “balls” shaped like a small pyramid, very soft and still good to throw and easy to catch. He throws one ball, and participant throw it around in the circle. He introduces a second, a third, a fourth… a ninth ball. And again and again tells (or shows through his actions) us:

What happens is after three or four rounds with the – for me well known – frustration I start to let go. I start to laugh. I start to be faster.  I even catch a ball. And it is fine but I don’t depend only on this feeling of “success”. I am in the middle of the game. Feeling connected to the other people, together inventing different ways to catch / throw balls, to alter the rules of the game, to play with being near and far, being fast and slow. So it also could be defined as a cooperate research process on ball games, on connectivity, on cooperation, on finding / evolve / connect / merge ideas.

So what was necessary to reach this state of mind, to once again (co)create the improflair?

Duncan Maverick didn’t use any warm ups. He used a room that is big enough. He helped us to shape a circle together. He threw the balls and explained all the times. And he named the frustration. The eagerness to succeed to “properly” throw and catch balls. And told us, there is no “properly” way to do it. That there are infinite variations how to do it. And he kept on telling this, succeeding to plant seeds of joy and laughter and working together – creating a safe place for really anybody.

Of course at this very workshop it also was helpful, everybody knew that Duncan will use unusual methods, performative approaches, will work with “overloading”.

To sum it up, some findings:

And if you do that, some people will feel out of place, mental overloaded, have the feeling they are to “slow” for “that” kind of activities, to less creative. You won’t succeed in including all people. Some even will feel excluded and frustrated.

So if your aim is more inclusion it is important to:

“When pigs fly” is a figure of speech that says something is completely impossible, even unthinkable. For example: “Can people really change for good?” “Yes, when pigs fly.”

For us a flying pig is the moment of insight that brings shift and transformation in our clients, students, participants…

Join us in our quest.

We will not only look for flying pigs, we will also research ways to catch them, integrate them in our work and our lives with the help of methods and inspirations from the fields of Applied Improvisation and Strategic Narrative Embodiment.

In this online Pig Catching adventure you will be accompanied by Petro Janse van Vuuren from south Africa  and Christian F. Freisleben from Austria. END_OF_DOCUMENT_TOKEN_TO_BE_REPLACED